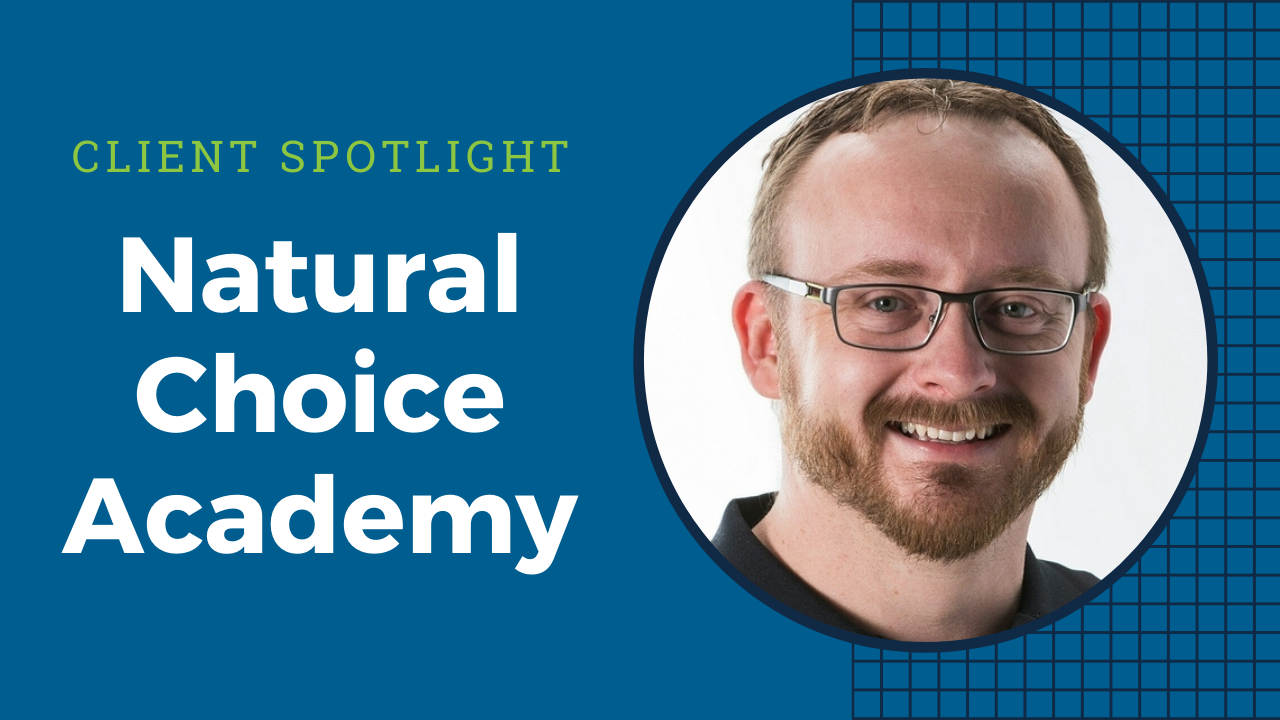 When Ted Batycki, Co-Founder and President of Phoenix organic preschool and kindergarten Natural Choice Academy, and his wife Genna found out they were expecting, they had all the usual new parent questions. Though their answer to one of the needs they faced as new parents ended up turning into what is now a highly successful business for nine years running. I interviewed Ted to ask him about his journey and see what insights he could share from what he learned along the way. The conversation yielded an obvious central thesis, to wit: Persistent focus on a premium niche and consistent application of six core values locked in high profit margins and unshakeable customer loyalty. All while expanding from a preschool to a kindergarten... During a pandemic. Wow! How did he do it? How did he get started?

Read on and watch our interview to find out! ...

The initial seed for the idea of opening a preschool came up during one of the family brunches Ted enjoyed with his wife and her parents. He was working in banking, and his wife was an elementary school teacher. One day at brunch, his wife’s sister, a preschool teacher, was sharing some of the issues she saw at her school. That was the day the idea first came to them to start their own preschool. Ted thinks he was first to have the idea, but his wife thinks she was, so in his wisdom he defers to her for having come up with the idea.

Roughly two years later, they found out as a couple that they were pregnant! A little more than eight months after that, they “gave birth to two babies” in the same week, as they opened their doors on a Monday while their child was born the following Friday. I asked Ted what kind of changes he saw from his original business plan to the shape things have taken nine years later. As it happens, he’d just revisited his original business plan a few weeks prior to our chat, for nostalgia reasons. Ted said the main thing that jumped out the most was how central culture and core values became to the business, while they were completely absent from the original plan.

Over the nine years of growth, there have been many surprises. Perhaps the biggest surprise: The core values that now drive every decision, which wouldn’t even have been possible to write at the outset. Much of what exists as the values of the company were born of experience, and are now returned to on a daily basis to create a “consistent why” throughout the team.

I asked what those core values are and Ted shared them with me with ease, as they were printed mere feet from where he was sitting:

These core values are in every single room on his campus.

Whenever Ted is on campus, he has two primary tasks as he sees it. To give his staff a compliment based on something he heard or saw, and to revisit core values. As Ted sees it, they truly could not be more central to the success of his business.

Even the school’s pandemic response was informed by their core values! The core value in question was “All who enter are loved, all who stay are safe.” Due to their inability to maintain campus safety, they closed their doors ahead of government-mandated Covid pandemic closures.

According to Ted, generating core values is an introspective, thoughtful, and potentially contentious process. There should be a lot of thought, care, and passion put into developing them. If done right, they will have surprisingly broad applicability. Ted has been surprised at the range of problems, from responding to the pandemic to addressing national issues of equity and representation, that they’ve helped them face down as a business.

As far as private preschools, they pay dramatically higher than other preschools that don’t rely on federal HeadStart funds. Pound-for-pound, they’re proud to be leaders in employee compensation. Which wasn’t always the case!

Owning their former mistakes and saying they were wrong about something is a big part of the culture at Natural Choice Academy. This is perhaps best exemplified by how they managed reassessing teacher compensation. Two years ago they decided to stop comparing wages to industry averages and started instead polling their workers about how their compensation met up to their lifestyle. In his words:

“If they can’t live off their primary income, that’s a problem that is not just theirs. I own that problem because I’m the creating end of that problem”

It turned out the average gap in income most of their employees faced was around $200. So in order to improve the pay, while maintaining profitability, he knew he would need to raise prices. But thanks to the core values, he was able to humanize the need and faced zero resistance from his customers.

Planning for The Future as a Competitive Advantage

Though the business is a human enterprise, not one of selling widgets or serving other businesses, it is still a business. One of the primary things Ted focuses on as a business is gross margin. A key to the success to his business is focusing on being a premium service. One of the things he often says (a so-called ‘Tedism’:

“If you win on price, you will lose on price.” He doesn’t care what his competitors charge as long as it’s less than him."

What does this mean? Constant change and improvement, investments into the physical space, and always purchasing the best of whatever is needed. Somewhat like a shark that never stops swimming, the school is a place of constant attempts at improvement. Critical readers may note the relationship between this philosophy and the core value “We are always learning and growing.” This attitude to maintaining competitive advantage is always on Ted’s mind. When they first opened, they were the first preschool in the country to brand around an organic preschool (he even owns the domain organicpreschool.com).

Because of the often experimental nature of constant improvement, Ted takes care to move on from an experiment if it is unsuccessful. In poker, when one is "pot committed" they keep betting if they've already bet a lot. As Ted sees it, this cannot apply to business. When it comes to sunk costs, he doesn't sweat it if there was an attempt made that isn't paying off. If something isn't working, they'll just try something else that provides demonstrable value to the ability to remain high margin.

The pandemic will, in a surprising way, enable the school to maintain margin a year from now. Due to the need to pivot into a functional business model that works in post-covid world, they've actually raised prices (which, when they go up, do not go down).

Due to the need to create more connection and communication between classes and families, Ted looked to technology to bridge the gap given the unanticipated lack of physical space. They have created a Slack workspace for their customers, building a small but powerful community space for their clients. For parents looking to stay connected to the school, features like this are an extremely welcome value add. Slack was the third attempt at using software in this way and it has been surprisingly successful for use with customers.

A balanced focus on customer satisfaction also helps drive success at Natural Choice Academy. As Ted sees it, his customers aren’t in charge; he actually lives up to the core value of “All who enter are loved, all who stay are safe.” This means sometimes taking the side of a teacher over a parent, which can feel dangerous, but has always turned out to be the right call.

Just because Ted doesn’t let the customers dictate operations, doesn’t mean he isn’t persistently tracking satisfaction. Saying no is one of my favorite things on the planet, and this is a trait Ted and I share. He gave me a fantastic compliment:

“If somebody is your customer, I automatically trust what they’re thinking and I want to know what they’re doing, because I know you’re not going to have crappy customers.”

We both understand the painful truth that part of forging a premium business means saying no to the wrong customers. Another part, for Ted and the Natural Choice Academy, is not cutting corners on cost just because they could. He’s in a weird space, as he puts it: “The service we provide is paid for by someone who doesn’t receive it and is received by someone who can’t critique it.”

This would seem to leave a lot of room to increase margins by way of cutting costs. That’s why Ted fought so hard to keep their sixth core value, “What is right for children is what is right for our business.” This helps avoid penny wise but pound foolish decisions that may eke out small profits in the short term, but eat at the competitive advantage of being premium in the long term.

Summing up my awesome and informative chat with Ted, we found three core nuggets to take away:

Figure out your core values; define them, then let them define you. Make everybody a stakeholder in the process, and make sure the process is ongoing.

2. Premium Niching
Find out who you want to serve, and serve them impeccably well. Don’t try to be everything to everybody

3. Define Success, Then Measure It
Figure out what defines success to your business, and then track metrics that inform how it is in an ongoing fashion

I really enjoyed this Ted talk (lol) and I hope you gained something from reading about my conversation with him. If you are interested in watching the full video, it is available here. If you’d like to get help with measuring the metrics that define success for your business, please don’t hesitate to reach out to me.